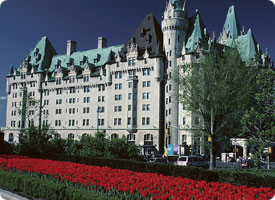 Ottawa is the capital of Canada, and its fourth largest city. With the neighbouring city of Gatineau in the province of Quebec, the region has about 1.2 million people. Ottawa is about four hours' drive northeast of Toronto; two hours west of Montreal; and one hour north of the border with the state of New York.

The story of Ottawa begins with the building of the Rideau Canal between 1826 and 1832 by Lt. Col. John By of the Royal Engineers and thousands of mostly Irish labourers. The Canal stretches 202 km  through Eastern Ontario to the St. Lawrence River and was built to ensure a supply line in case of American attack (which never came). The Canal was never used for a military purpose and its 49 locks are still operated in the same way as when they were built.

Queen Victoria decreed in 1857 that Ottawa would be the capital of the country that became Canada. The majestic Parliament Buildings were constructed shortly thereafter and remain a "must-see" attraction in the capital. As the capital, Ottawa is also home to 24 Sussex Drive (the prime minister's residence); Rideau Hall (home of the Governor General); and dozens of high commissions and embassies from governments around the world.

Several neighbourhoods offer entertainment options in Ottawa. The ByWard Market is one of Ottawa's oldest neighbourhoods and also functions as its entertainment district, with over 100 food and drink options in just a four-block-square area. Whether it's fine dining, a good diner, a cosy bistro, or a romantic cafe, you can find it in "the Market."

Elgin Street is another popular nightlife area, with an eclectic selection of bars, restaurants and cafes in just a few blocks. Bank Street offers three or four distinct areas along its length, including a popular area known as the Glebe. In the near west end, Westboro is also an attractive option for dinner and drinks.

Of course, one could also choose to explore the various options at the Casino du Lac-Leamy--whether it's gaming excitement or a show at its popular theatre or a dinner at its five-diamond restaurant Le Baccara. The region's other five-diamond establishment is Signatures at Le Cordon Bleu Ottawa.

There are over 11,000 hotel rooms in the Ottawa-Gatineau region. The major chains (Hilton, Fairmont, Westin, Marriott, Delta, Sheraton, Novotel, Holiday Inn, Best Western, Comfort Inn) are represented, as well as more unique offerings such as the boutique ARC the.hotel or Brookstreet Resort.

Downtown locations are within walking distance to many major attractions. Several bed-and-breakfast providers also offer a cosy alternative to hotels.

A comprehensive list of options is found at www.ottawatourism.ca