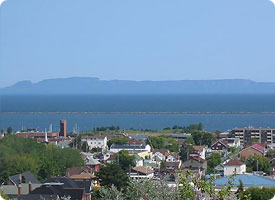 Thunder Bay (2001 population 109,016) was formed in 1970 by the merger of the cities of Fort William, Port Arthur and the townships of Neebing and McIntyre. Its port forms an important link in the shipping of grain and other products from western Canada through the Great Lakes and the Saint Lawrence Seaway to the east coast. The city is often referred to as the Lakehead or Canadian Lakehead because of its location at the end of Great Lakes navigation.

One of Thunder Bay's main tourist attractions is Fort William Historical Park , a reconstruction of the North West Company's Fort William fur trade post as it was in 1815. Thunder Bay harbor also draws visitors because of the beautiful view of the Sleeping Giant and the presence of various water craft. The Thunder Bay Marina includes an along-the-lake-walk, playground, harbour cruises, a children's museum and Chinese/Canadian cuisine. Other tourists attractions are listed below. A statue of Terry Fox is situated outside the city near the location where he was forced to abandon his run.