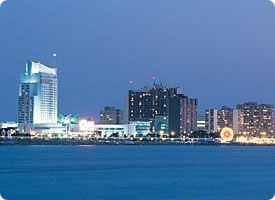 Windsor is the southernmost metropoliton city in Canada. It lies at the western end of the heavily populated Quebec City-Windsor Corridor, is the second largest city in Southwestern Ontario, and the seat of Essex County. Windsor is located directly south of Detroit and is separated from that city by the Detroit River. The region marks the only border crossing where entering the mainland United States from Canada involves traveling north. In the 2001 Canadian census, the city had a population of 208,402 and its official metropolitan area (consisting of Windsor, Tecumseh, Amherstburg, LaSalle and Lakeshore) had a population of 307,877.

Windsor tourist attractions include Casino Windsor, a lively downtown, the Capitol Theatre, Little Italy, the Art Gallery of Windsor, the Odette Sculpture Park, Ojibway Park, and nearby Point Pelee National Park. Windsor was a major entry point into Canada for refugees from slavery via the Underground Railroad and a major source of liquor during American Prohibition.

Windsor's nickname is the "Rose city or the city of roses' and the city is noted for its several large parks and gardens found on its waterfront. The Queen Elizabeth II Sunken Garden is located at Jackson Park in the central part of the city. A WWII era Lancaster Bomber was displayed on a stand in the middle of Jackson Park for over four decades, but has since been removed for restoration. This park is now home to a mounted Spitfire replica and a Hurricane replica.

Of the parks along Windsor's waterfront, the largest is the five-kilometre (three mile) stretch overlooking the Detroit skyline. It stretches from the Ambassador Bridge to the Hiram Walker Distillery. The western portion of the park contains the Odette Sculpture Park which features over 30 large-scale contemporary sculptures for public viewing, along with the Canadian Vietnam Veterans Memorial. The central portion contains Dieppe Gardens, Civic Terrace and Festival Plaza, and the eastern portion is home to the Bert Weeks Memorial Gardens. Further east along the waterfront is Coventry Gardens, across from Detroit's Belle Isle. The focal point of this park is the Charles Brooks Memorial Peace Fountain which actually floats in the Detroit River and has a coloured light display at night. The fountain is the largest of its kind in North America and symbolizes the peaceful relationship between Canada and the United States.

Every summer Windsor co-hosts the two-week-long Windsor-Detroit International Freedom Festival, which culminates in a gigantic fireworks display that celebrates Canada Day and the American Independence Day. The fireworks display is among the world's largest and is held on the final Wednesday in June on the Detroit River between the two downtowns. Each year, the event attracts over a million spectators to both sides of the riverfront.

The University of Windsor is a non-denominational, provincially-supported, coeducational, public comprehensive university.  It has a student population of over 15,000 full-time and part-time undergraduate students and over 1000 graduate students. It is a member of the National Conference of Canadian Universities and Colleges, the University Articulation Board of Ontario, the International Association of Universities, and the Association of the British Commonwealth. More than 80,000 individuals around the world call the University of Windsor their alma mater.