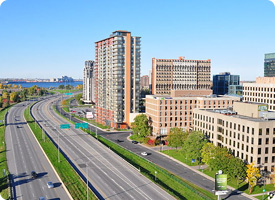 Longueuil, QC sits on the south shore of the Saint Lawrence River directly across from Montreal. The population as of the Canada 2011 Census totaled 231,409, making it Montreal's second largest suburb, the fifth most populous city in Quebec.

Longueuil is a residential, commercial and industrial city. It incorporates some urban features, but is essentially a suburb. Longueuil can be classified as a commuter town as a large portion of its residents commute to work in Montreal.

The city consists of three boroughs: