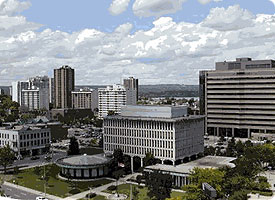 Hamilton, currently the 8th largest city in Canada, with a population estimated at 714,900 in the metropolitan area.

Hamilton is located on the western end of the Niagara Peninsula and at the westernmost part of Lake Ontario, most of the city including the downtown section are on the south shore. Situated in the geographic centre of the Golden Horseshoe and is roughly the midway point between Toronto and Buffalo. The two major physical features are Hamilton Harbour marking the northern limit of the city and the Niagara Escarpment running through the middle of the city across its entire breadth, bisecting the city into 'upper' and 'lower' parts.

As city limits expanded to include the Mountain, the retronym for the city below the Escarpment became the Lower City (now often just referred to as downtown). The east/west divide line for the mountain is Upper James Street, and the east/west divide line for downtown is James Street. The south Mountain begins at approximately Limeridge Road or the Lincoln M. Alexander Expressway.

The former boroughs of Hamilton-Wentworth Region, are: Stoney Creek, Dundas, Flamborough, Ancaster and Township of Glanbrook. They have maintained their names as wards in the municipal government in the city of Hamilton. Locally these boroughs are referred to as "the suburbs" of Hamilton.

Hamilton hosts a number of events, including: the Annual Tourism Awards of Excellence, the Tourism Summit, the Spring Networking Session, input sessions for the annual marketing plan as well as workshops, committee meetings and task force meetings.  Please visit the Hamilton Tourism website for a full list of events.