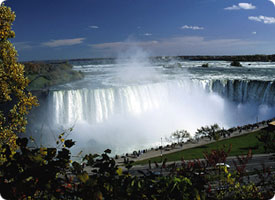 Niagara Falls has certainly grown over the last thirty years. When I was a kid, I remember that it was Niagara Falls itself as the only real attraction here. This natural wonder of the world consists of two main falls; the semi-circular shaped Horseshoe Falls where daredevils in buckets have thrown themselves off and the smaller American Falls to the left of it. The Floral Clock, Maid of the Mist boat rides that take visitors up close to the falls were already there as well as the cable gondola over the whirlpool just minutes up north but that was about it. The Minolta Tower was also there but the newer Skylon Tower had not been built yet. Niagara Falls was still known as a honeymooner's destination with hotels that had heart shaped jacuzzis and other romantic features. Today, the Maid of the Mist and other original attractions are still there but the city of Niagara Falls has exploded with growth in hotels and tourist attractions including a large casino added in recent years.

Niagara Falls is 30 minutes from the Buffalo airport and 90 minutes from the Toronto airport. Although there are hotels on both the US and Canadian sides, most tourist facilities and attractions are on the Canadian side. The best views of both falls are from the Canadian side as well. There are hotels and motels that suit every budget from large hotel chains, smaller well known motel chains down to independents. The same with restaurants as there's lots of fast food outlets up to the classiest restaurants with views of the colored lit falls during the evenings. Attractions now include high tech rides, an Imax theatre, power jet boat rides and much more. Some folks say that the growth of the touristy side of Niagara Falls has made the destination a bit tackier with the addition of such attractions as mini-golf, was museums and Ripley's Believe It or Not. This is part of Niagara Falls trying to be something for everyone including families.

Close by is Marineland which is the Canadian equivalent of the Sea Worlds in Florida and California. This attraction is probably the best of its kind in Canada with both marine and land animals. In addition to excellent shows with the standard killer whales, dolphins and sea lions, Marineland added Beluga whales from the high Arctic. One often missed attraction is the nearby town of Niagara-on-the-Lake which is an easy 10 minute drive north. This town of quaint, elegant boutiques and the home of the Shaw Festival theatre is totally different from the busier and more touristy Niagara Falls. One should definitely pay a visit to Niagara-on-the-Lake to enjoy a nice break from the crowds of the falls area. For cyclists and inline skaters, there's a wonderful trail not to be missed nearby.

For wine enthusiasts, there are numerous wineries in the surrounding Niagara area in Ontario. Many of these wineries are open to the public for taste samples as well as tours of their orchards and facilities. The Niagara area is where the famous ice wines of Ontario are made. If you haven't tried this premium dessert wine made from frozen grapes picked in the middle of the Canadian winter, there's ample opportunity to do so here in the Niagara region at both the wineries that make them as well as the many restaurants that feature them.

Niagara Falls is still a great attraction but there's much more to see and do besides the usual touristy things so heavily promoted. If you haven't been to Niagara Falls, it's definitely worth a visit, especially if added on with a trip to Toronto. For those who have been to Niagara Falls but haven't been for many years, a return visit will reveal much more than ever before, especially in the surrounding areas such as Niagara-on-the-Lake that might have been missed out on prior trips.