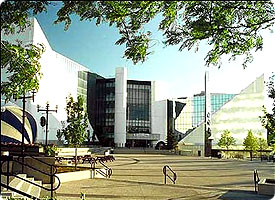 Scarborough is the area that forms the eastern part of the City of Toronto . It was a separate city for over 200 years, but has been part of the 'East District' of Toronto since 1997. Scarborough is a dynamic area of many facets. Residential and recreational land with extensive parks and woodlands, co-exist harmoniously with retail, manufacturing, and government land uses, in a very pleasant working relationship which provides a growing, energetic economy, community and a satisfying place to live

In 2001, Scarborough's population was 593,297. A study based on census data between 1996 and 2001 shows that Scarborough's growth rate was more than 6%, the highest growth in Toronto. Its population is second to North York, but if this trend continues it should be the most populated district in Toronto by 2010.

The area was named after Scarborough, North Yorkshire, England by Elizabeth Simcoe, the wife of John Graves Simcoe, the first lieutenant governor of Upper Canada. The bluffs along Scarborough's Lake Ontario shores reminded her of the limestone cliffs in Scarborough, England.