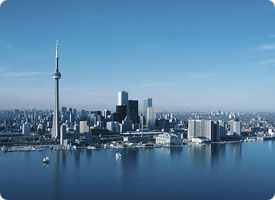 The City of Toronto is home to more than 2.5 million people. It is the centre of one of North America's most dynamic regions and is the cultural, entertainment, and financial capital of the Canada. Toronto is also the capital city of the Province of Ontario.

With a population of 2,481,494, it is the most populous city in Canada and the fifth most populous in North America (after Mexico City, New York City, Los Angeles, and Chicago).

The city is the centre of the Greater Toronto Area (GTA), a regional conurbation, and the much larger Golden Horseshoe, a densely populated region in Ontario which is home to over eight million people, roughly one quarter of the Canadian population. The population of the Toronto Census Metropolitan Area (CMA) is estimated at 5,304,100 in 2005.

Toronto is one of the most multicultural cities in the world. In 2004, the United Nations Development Programme (UNDP) ranked Toronto second, behind Miami, in its "List of World Cities with the Largest Percentage of Foreign-born Population".  Toronto represents a multicultural mosaic. The 2001 Canadian census indicates 42.8% of Toronto's population being of a visible minority.