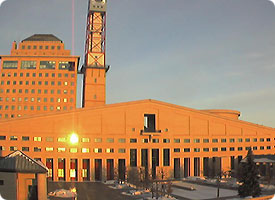 The City of Mississauga is Canada's sixth largest city, with a Population of at least 680,000 is still growing rapidly. Mississauga is located in the Peel Regional Municipality, west of Toronto. A part of the Greater Toronto Area, it is also the largest suburban municipality in North America.  It was purchased by the British in 1805 and incorporated as a city in 1974. Mississauga is a sister city of Kariya, Japan.

With seven major highways passing through the city, Mississauga offers fast and convenient access to major destinations in Canada and the United States. In addition, most of Toronto Pearson International Airport, Canada's busiest, is located in the city. Mississauga has doubled in size in each of the last two decades. Mississauga had the largest population growth in Canada (89,500) between the census years of 1986-1991. Another 80,994 were added between 1991-1996; an increase of 17.5% in the four year period.

Despite its size, Mississauga is thought of by some as a suburb of Toronto and the two cities' urban sprawls are indistinguishably linked. As Toronto has continued to grow economically, Mississauga has followed suit, building predominantly low-density tract housing and high rise condominiums to attract individuals tired of city life. At the same time, businesses saw the benefits of locating to Mississauga - low tax rates, proximity to a number of transportation routes (air, rail, road), proximity to Toronto, and an abundance of land (at least, at the time) - and it soon became desirable to locate there. The city is debt-free and has not borrowed money since 1978.

While being in the top ten Canadian cities by population, Mississauga has few cultural institutions for a community its size due to its proximity to Toronto. It is by far the largest city in Canada without a daily newspaper (The Mississauga News is three days a week), and currently doesn't have any television stations or commercial radio stations. Mississauga is beginning to break away from its label as a "bedroom community" to Toronto as 25,000 more workers commute to jobs in Mississauga than leave. Despite this, Mississauga is virtually unknown outside of Ontario.

Many new businesses are being attracted by competitive tax rates with exceptional services, infrastructure and transportation links. The lowest crime rate across all the major Canadian cities also makes it a prime location for families to settle.  Mississauga is home to more than 18,000 companies ranging from corporate head offices and industrial branch operations to corner store retail businesses, and including 50 of Canada's Fortune 500. The Mississauga business community is facing certain issues at this time. With international competition, political and economic changes and rapidly advancing technology, companies require more adaptable and more highly skilled workers. Employers recognize the need to retrain the existing labour force and incorporate those who would like to work but have been limited so far due to low skill levels and other barriers.

Mississauga has provided an ideal environment for small businesses. Many developers have built small multiple units which provide efficient and affordable accommodations for small companies. The economic stability of Mississauga is enhanced by thousands of small and medium-sized businesses. A large percentage of these employers have fewer than 50 employees.