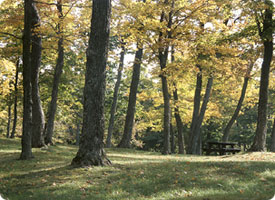 Woodbridge is a large suburban community (2001 pop. 69,460) in the City of Vaughan, just north of Toronto. It was once an independent town before being amalgamated with nearby communities to form the city in 1971.

Although Woodbridge is part of the larger City of Vaughan, few people identify with the municipality as a whole, and the community is typically seen by residents and outsiders as a sizeable city in the Greater Toronto Area in and of itself.