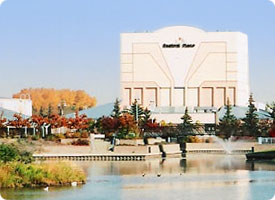 Sherwood Park, located just outside of Edmonton's city limits, is a community with a population of 55,063 (2005) within Strathcona County. Sherwood Park has enough people to be Alberta's seventh largest city and, although Sherwood Park technically retains the status of a hamlet (which has earned the region a spot in the Guinness Book of World Records for being the world's largest hamlet), the Government of Alberta recognizes the Sherwood Park Urban Service area as equivalent to a city. Sherwood Park also boasts very low crime rates, including a near zero violent crime rate.  It is largely a bedroom community, with the bulk of its workers commuting to Edmonton each workday.

Sherwood Park has a strong economy with over $9.0 billion worth of major projects completed, announced, or under construction. A roadway known as Refinery Row lies west of Sherwood Park and includes some of the largest industrial facilities in Western Canada.