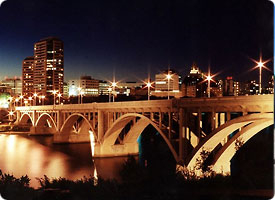 Saskatoon is the most populous city in the province of Saskatchewan, and has been since the mid-1980s when it surpassed the provincial capital of Regina. Residents of Saskatoon are called Saskatonians.

Saskatoon is often called the "City of Bridges' for its seven river crossings (it is also occasionally referred to as "The Paris of the Prairies", for the same reason). The name Saskatoon comes from the Cree inanimate noun "misâskwatômina,' which refers to a sweet, violet-colored berry that grows in the area. A long-time nickname for Saskatoon is "Hub City", while the name is also commonly abbreviated "S'toon".

One of the city's best known landmarks is the Delta Bessborough Hotel, better known as simply, The Bessborough, the Hotel Bessborough or, more colloquially, "The Bess' (or "The Bez"; the latter is phonetic). Built by the CNR, a federal crown corporation, as a railway hotel during the Great Depression of the 1930s as a make-work project, the hotel was designed to resemble a Bavarian castle. The hotel has passed out of the ownership of the CNR and has survived several changes in ownership, as well as the suggestion that it be demolished in order to restore the riverbank. The Bessborough and the Mendel Art Gallery are currently the only two major structures located on the river side of Spadina Crescent. Over the years, the Bessborough has become Saskatoon's most iconic symbol and most recognizable skyline feature; one of the most frequently-circulated photographs depicting Saskatoon is of the hotel framed in one of the arches of the Broadway Bridge.

After explosive residential growth in the 1970s and early 1980s, by the late 1980s development of new communities slowed to a trickle as the economy experienced a downturn. By 2005, however, Saskatoon was in the midst of another growth boom with construction under way on no less than four major residential areas, plus early planning launched on several proposed business parks and the Blairmore Suburban Development Area, also known as the "West Sector", a large recently annexed area on the city's west side which is expected to include seven residential communities, a business park, and a "suburban centre' in the coming years.

Saskatoon is recognized as one of the world's leading Agricultural Biotechnology centres. Some of this research takes place at Innovation Place Research Park and the University of Saskatchewan (U of S). The U of S hosts the Vaccine and Infectious Disease Organization(VIDO) that conducts infectious diseases research to develop infectious diseases controls for humans and animals.

The University of Saskatchewan campus, is located along the eastern bank of the South Saskatchewan River and spans 7.55 km². The university was established in 1907. The first classes were held in the Drinkle Building in downtown Saskatoon. Construction of the university campus in its current location began in 1909, and all of the original greystone facade buildings remain today. The university has a yearly attendance of roughly 19,000 students. The university is home to the Canadian Light Source, Canada's only synchrotron.