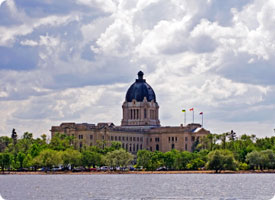 Regina is the major commercial centre of southern Saskatchewan, Canada. It is the provincial capital and was previously the territorial headquarters of the North-West Territories, of which today's provinces of Saskatchewan and Alberta originally formed part. Regina was also the district headquarters of the District of Assiniboia. Regina was named in 1882 after Queen Victoria, i.e. Victoria Regina, by her daughter Princess Louise, wife of the then-Governor General the Marquess of Lorne.

Regina is a cultural and commercial metropole for both southern Saskatchewan and adjacent areas in the neighbouring American states of North Dakota and Montana. It attracts numerous visitors for the vitality of its commerce, theatre, concerts and restaurants and to its summer agricultural fair.

Regina was incorporated as a city on June 19, 1903 and was proclaimed the capital of the province of Saskatchewan on May 23, 1906 by the first provincial government, led by Premier Walter Scott. On June 30 1912, a tornado known as the Regina Cyclone hit the community, levelling much of the young city's business district, killing 28 people and injuring hundreds, making it Canada's deadliest tornado.

Regina has a large percentage of its overall area devoted to parks and greenspaces, with biking paths and other recreational facilities throughout the city. The City operates five municipal golf courses, including two in King's Park northeast of the city. Kings Park Recreation facilty is also home to ball diamonds, picnic grounds as well as stock car racing.

Within half an hour's drive is the summer cottage and camping country in the Qu'Appelle Valley with Last Mountain and Buffalo Pound Lakes and the four Fishing Lakes of Pasqua, Echo, Mission and Katepwa; slightly farther east are Round and Crooked Lakes.

Oil and natural gas, potash, kaolin, sodium sulphite and bentonite contribute a great part of Regina and area's economy. The farm and agricultural component is still a significant part of the economy but it is no longer the major driver of the economy; provincially it has slipped to eighth overall, well behind the natural resources sectors. The Innovation Place Research Park near the University of Regina hosts several science and technology companies.

The University of Regina presently has an enrollment of over 12,500 full and part-time students.  In the years prior to the establishment of the University of Saskatchewan there was continued debate as to which Saskatchewan city would be awarded the provincial university: ultimately Saskatoon won out over Regina and in immediate reaction the Methodist Church of Canada established Regina College in Regina